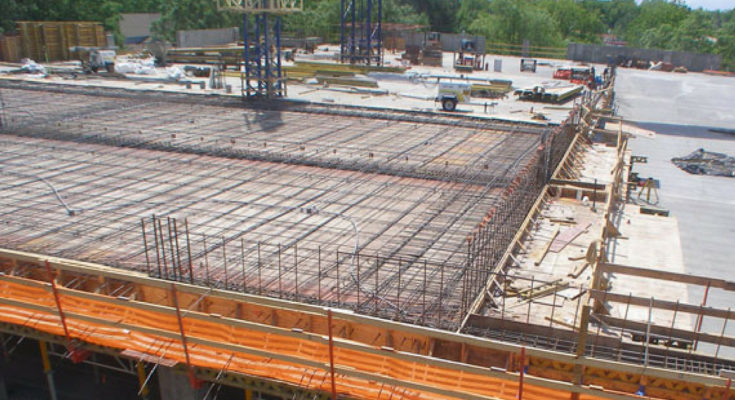 (a) For Simply Supported Slab

The effective span is taken as smaller of the following:

(i) Centre to centre of supports.

(ii) Clear distance between the supports plus the effective depth.

(b) For Continuous Slab

In a continuous slab, where the width of support is less than 1/12 of the clear span, the effective span should be taken as given in (a) for simply supported slab.

If the supports are wider than 1/12 of the clear span, or 600mm whichever is less, the effective span shall be taken as under:

(i) For end span, with one end free and the other end continuous or for intermediate spans, the effective span shall be the clear span between supports.

For slabs, the vertical deflection limits are specified by maximum l/d ratio:

(b) For spans greater than 10 m, the above value may be multiplied by 10/span, except for cantilever, for which exact deflection calculations should be made.

(c) Depending on the area and type of tensile steel the above values may be modified.

(d) For slabs spanning in two directions, the shorter of the two spans shall be used for calculating span to effective depth ratio.

For two way slabs of small spans (upto 3.5m) with mild steel reinforcement, the shorter span to overall depth (given below) ratios may be assumed to satisfy the deflection limits for loading class upto 3000N/m2 .

For high strength deformed bars the values given above should be multiplied by 0.8.

The area of reinforcement in either direction in a slab should not be less than 0.15 percent of the total cross-sectional area in case of mild steel reinforcement. In the case of high strength deformed bars, this values can be reduced to 0.12 percent.

The maximum diameter of the reinforcing bar in a slab should not exceed 1/8th of the total thickness of the slab.

(i) To distribute the concentrated loads coming on the slab.

(ii) To protect against shrinkage and temperature stresses.

(iii) To keep the main steel bar in position.

The distribution steel is kept above the main steel and is not provided with hook at the ends.

(ii) The vertical distance between two layers of main reinforcement shall be more than:

(2) Maximum Distance between Bars in Tension

(i) The spacing of main steel in a slab should not exceed the following:

(ii) The spacing of the bars provided to act as distribution steel (discussed later) or bars provided for preventing temperature and shrinkage stresses shall not exceed the following:

Nominal cover to be provided in a slab is 20mm and the other values of cover for different environmental conditions.

Some of the main reinforcement in slabs are generally bent up near the supports to take up negative moment which may develop due to partial fixity. Generally alternate bars are bent up at a distance of 0.15l (or l/7) from the centre of supports. The bar available at the upper face should be more than l/10 (0.1l) from the centre of support. The reinforcement detailing of one way slab is shown in Fig.

The bars in a slab may be curtailed as per the recommendation in code. But in practice, the bars are bent and not curtailed in slabs.

Slabs are safe in shear (nominal shear stress is very low since b is large) therefore no shear reinforcement is provided in slabs except that the alternate bars are bent up near the supports.

The various loads coming on a slab are as follows:

(i) Self weight (dead load) of the slab

(ii) Live loads as per use.